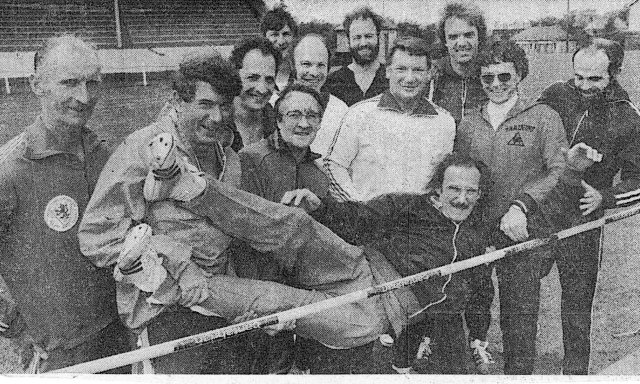 In 1962, due to falling numbers and the resulting drop in standards being experienced by all of the Former Pupils Athletic Clubs in Edinburgh, representatives of the Clubs met in the Royal Scots Club, in Abercromby Place Edinburgh to discuss the problem.

The outcome of that meeting was that the eight clubs agreed to combine to form one club, Octavians Athletic Club which would allow the new club to compete nationally against all of the Scottish Harrier and open Athletic Clubs

The Club became a victim of its own success, as the team was principally made up of District and National Champions and both Scottish and G.B. Internationals, as a result youngsters found that they could not get into the team; so they went elsewhere.

The Club folded in 1971 then, after providing two trophies – one in the form of a baton for the Octavian Relays  at Grangemouth, the other a Sword to be awarded annually at the Carnethy Hill Race meeting ( won by club member Robin Morris) – the members used all that was left of the club’s funds  on a grand dinner in the Carlton Hotel Edinburgh.

In 1981 a ‘reunion’ contest was held at Myreside ; a report with a photograph of those present was published  in the Scotsman.

This site uses Akismet to reduce spam. Learn how your comment data is processed.

BACK ROADS AND OTHER STORIES

Your Choice Our Choice