Octavians were smiling but southern were not!

OCTAVIANS WERE SMILING BUT SOUTHERN WERE NOT 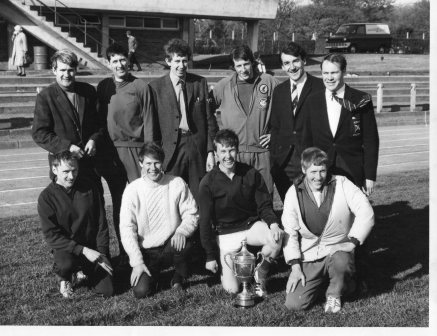 ‘Edinburgh Southern Harriers went away from Dam Park, Ayr on Saturday convinced that they, and not Octavians, should have won the Land O’Burns Trophy. It is easy to see why they thought this but difficult to sympathise with the line of reasoning.
The ruling that forced team managers to declare their competitors 45 minutes before each event, was the root of the trouble. Edinburgh Southern in common with a few of the 11 other clubs competing, were too late in submitting names for the first race, the 440 yards hurdles and so their man, Sandy Robertson had to spectate while Octavians Peter Burgess and Ian Dobson gained nine points for taking second and third place behind Ricky Taylor(Ayr Seaforth)
The race must have assumed mammoth proportions in the minds of Southern officials as the meeting drew to a close and the final pointages – Octavians 45, Edinburgh Southern Harriers 44, Ayr Seaforth 44 – were given out. There was even a suggestion from the beaten club that they would have to reconsider taking part next year, but we can only hope that they decide to compete again. Without them (holders during the past four years) the standard would suffer a decline.’
Pointages for other clubs in the Land O’Burns Trophy were Victoria Park 37, Bellahouston 26, Shettleston 23, Law 21, Garscube 9,Springburn 7, Kilmarnock 4.

POSTSCRIPT
There was no Land O’Burns Trophy meeting in 1970 as there was a full calendar of events on the lead up to the Commonwealth Games. There was a meeting in 1971 where Octavians lost to ESH by 1 point, ESH 49, Octavians 48. There were no more meetings after that, as Octavians had disbanded and ESH were competing in Division 1 of the British Athletic League. Edinburgh AC were in Division 4. In March 2015 , Neil Donnachie (EAC) contacted us on behalf of Ricky Taylor of Ayr regarding the whereabouts of the Trophy. After our 1969 win, the trophy sat on Donald Burr’s sideboard till November 1969. He handed it over to Ian Grant who took over as Secretary when Donald left Edinburgh.
Is it still in Edinburgh Southern’s Trophy room?

Brian McAusland in his excellent history of the Octavians- scottishdistancerunninghistory.scot/octavians-aac uses the delightful and most apt adjective – timeous – against Donald Burr who was Octavians team manager that day. Donald was staying with his in-laws in Ayr that weekend, so was only 6 or 7 minutes away from Dam Park.

Random views and musings with a sprinkling of idiocy